Part II  Video  What are the important issues confronting City Council in 2015 and beyond? At the first Forum of 2015, David Mann, Cincinnati’s Vice Mayor, will address this question as well as assessing how he sees government’s role in future developments and plans for the city. This luncheon presentation takes place at 12:00 noon, Thursday January 22nd, 2015Christ Church Cathedral Forum Room (Third Floor), 318 East Fourth Street.

Whither Political Reform In Ohio?A Review Of The New Redistricting Proposal

Common Cause Ohio joined partner organizations in Cincinnati to review the details of  Issue 1, a referendum that would reduce partisanship while increasing fairness and transparency in redistricting of the Ohio General Assembly districts. Catherine Turcer, Common Cause Ohio policy analyst, described for the audience Ohio’s gerrymandering problem. She highlighted how legislators drew current districts behind closed doors in a hotel room referred to as “the bunker” and how one legislator successfully obtained the inclusion of a major donor in his district.  Read More

Since 1924, Cincinnati City Government has operated under a Council/Manager system.  Mayor Cranley, with the approval of Council, recently appointed a new City Manager who took office in September. At the next Community Issues Forum, City Manager Harry Black will discuss his views on the challenges confronting City Government in 2015 and beyond. This luncheon presentation takes place at 12:00 noon, Thursday February 26th, Christ Church Cathedral Forum Room (Third Floor), 318 East Fourth Street.

The names and places are now well known: Trayvon Martin, Michael Brown, Eric Garner, Michael Crawford, Ferguson, Missouri, Atlanta, Georgia, New York, New York, and Dayton, Ohio.  So too is the banner under which many young people are coming together: # Black Lives Matter  (BLM).  BLM is a new wave of organizations and actions through which young people are sharing their outrage regarding killings by police and vigilantes that are going unpunished. This luncheon presentation takes place at 12:00 noon, Thursday March 12, Christ Church Cathedral Forum Room (Third Floor), 318 East Fourth Street.  See Video

DISCUSSION: How We Overcome Fears And Misunderstandings That Create Walls Separating Us From Various Groups In Our Community
(Part VI Of The Welcoming The Stranger Series)  May 21, 2015

The final Forum of “The Welcoming the Stranger Series” focuses on overcoming fears and misunderstandings that create barriers separating us from various groups in our community. Trained volunteers from the Intercommunity Justice and Peace Center will facilitate a dialogue that explores what people have learned from the first five sessions of this series. Speakers from the earlier Forums will also be invited to participate in these dialogue sessions to assist when specific information is needed.

“United We Dream”: Immigrant Youth Discuss Their Struggle for Immigration Reform,Thursday,  March 26, 2015, Noon
Manuel Perez and Flequer Vera, representatives from the CUC will be featured at our next panel to share more details about their work and answer your questions about immigrant community in Cincinnati and the prospects for meaningful immigration reform.

Homelessness should not exist in an affluent country such as the U.S. Too often homeless individuals and families are blamed for their plight, or they are treated as aliens far removed from everyday life. At the next Community Issues Forum, Josh Spring, Executive Director of the Greater Cincinnati Coalition for the Homeless,will put human faces on the homeless and show how they are our brothers and sisters and not strangers. This luncheon presentation takes place at 12:00 noon, ThursdayApril 9th, Christ Church Cathedral Forum Room (Third Floor), 318 East Fourth Street.  Video-30 year History of the Homeless Coalition

“Responding to the Critical Need for Affordable Housing in Cincinnati: Lessons on Overcoming Local Governance and Community Opposition” – Thursday, April 23, 2015A new study presented by a panel led by Michelle Dillingham, Director of Education, Homeless Coalition.    (Part IV of The Welcoming The Stranger Series)

Many times the general public may believe that it is funding, or lack of available land that prevents the development of affordable housing. However even when funding and land is available, it can be community resistance that prevents the housing from being built.

Overcoming Fears And Mistrust Of The Muslim Community:  Better Understanding Our Muslim Brothers and Sisters(Part V Of The Welcoming The Stranger Series)Thursday May 7, 2015, 12:00 Noon,

In the Forum’s “welcoming the stranger series,” attendees have grappled with the issues that often needlessly pit groups against each other. The tragedy of 9/11 and certain events and actions in the Middle East have created fears and mistrust in our country of Muslims and Islam. At the next Community Issues Forum, Shaykh Ismaeel Chartier, Imam of the Clifton Mosque in Cincinnati, will demythologize many of the views about Muslims and the Islamic faith that have fostered these feeling of alienation. The Rev. Canon Manoj Mathew Zacharia, Sub-Dean, Christ Church Cathedral, will welcome Imam Chartier and offer his faith perspective to the discussion.  Video Part II,  Part III

Special Forum! Taking Back Democracy One Step At A Time: Step I – Redistricting Reform In Ohio A Workshop Friday, May 15, 2015 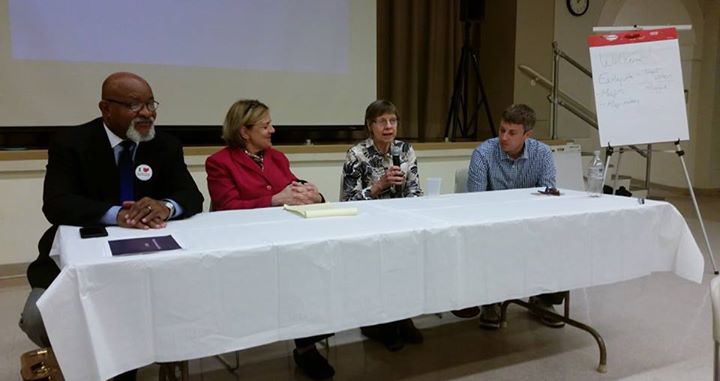 Ohio is one of the most gerrymandered states in the nation. Come here how citizens have an opportunity this year to pass significant reform that would create fair state election districts. Learn about the details of Issue I, the Ohio Constitutional Amendment that will be on this November’s ballot. Find out how you can be an effective voice for change on this important issue.  READ SUMMARY OF FORUM

Human Trafficking In Cincinnati And The Off The Streets Program –  Plus A Tour Of The New Anna Louise Inn Thursday September 17, 2015, 12:00 Noon,

Human trafficking is often portrayed as an international or national issue, but its end results impact communities such as Cincinnati. The first Community Issues Forum of the 2015-2016 series will focus on human trafficking and the Off the Streets Program, a program run by the Anna Louise Inn to help women escape from prostitution in order to forge new lives. Speakers at the Forum will be Mary Carol Melton, Executive Vice President of the Anna Louise Inn, and the Rev. Noel Julnes Dehner, who is producing a documentary on human trafficking. The Forum will also include a tour of the new Anna Louise Inn. This luncheon presentation takes place at 12:00 noon, Thursday September 17th, the Anna Louise Inn, 2401 Reading Road. Since this Forum will not take place at the Cathedral reservations will be required because of space limitations. Call Bill Woods or Ed Burdell at (513) 381-4994. Finally, people concerned about this topic may also wish to hear the Rev. Becca Stevens of Thistle Farm, TN speak about her program for victims of human trafficking at Christ Church Cathedral, 10:00AM  Service, September 27th.

I]
Important ballot issues dominate this fall’s elections. They include three Ohio Constitutional Amendments and two City Charter Amendments. At the next Community Issues Forum, the pros and cons of these issues will be reviewed. Brewster Rhoads, representing Cincinnatians for Parks, will speak in favor of the City Charter Amendment proposal for a park development tax, and Tim Mara, representing Save Our Parks, will make the case against it. Then Alice Schneider, President of the Woman’s City Club, and Bill Woods, former Chair of Common Cause/Ohio, will depict Issue I (redistricting reform), and Jane Anderson, Professor of Political Science at the University of Cincinnati, will examine Issue 3 (the legalization of marijuana). This luncheon presentation takes place at 12:00 noon,Wednesday September 30th, Christ Church Cathedral, 318 East Fourth Street.

Almost every day a story appears in the local news about public education. A lot of very important issues and policy decisions are being made about our public schools and they affect all of us. The next Community Issues Forum will focus on several of these hot educational topics. They include: 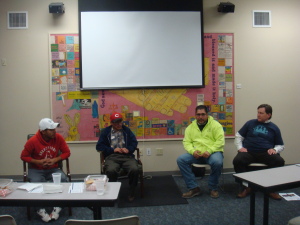 Wage theft takes place daily in Cincinnati and in communities across the country. Recent immigrants and the working poor are the primary victims of this ugly practice. At the next Community Issues Forum, Brennan Grayson, Executive Director of the Cincinnati Interfaith Workers Center and several panelists who have experienced wage theft, will make the case for the passage of an anti-wage theft ordinance in Cincinnati. This luncheon presentation takes place at 12:00 noon, Thursday October 29th, Christ Church Cathedral Forum Room (Third Floor), 318 East Fourth Street.

Local wage theft received intense scrutiny at the Community Issues Forum at Christ Church Cathedral on October 29th. A panel led by Brennan Grayson, Executive Director of the Cincinnati Interfaith Workers Center, also made the case for a proposed anti-wage theft City Ordinance. Such an ordinance, according to Grayson, would help prevent the all too prevalent practice of cheating workers out of all or part of their wages. READ MORE

Although Cincinnati is making progress in many areas, a recent study shows that its African American residents are not faring well. The State of Black Cincinnati 2015: Two Cities, a report recently released by the Urban League of Southwestern Ohio, presents some grim statistics that reveal the stark racial disparities that exist in the Queen City. At the next Community Issues Forum, Mark Curnutte, the Urban League’s Vice President of Marketing and Communications and the editor of the study, will review the findings of the report and discuss their implications. This luncheon presentation takes place at 12:00 noon, Thursday November 12th, Christ Church Cathedral Forum Room (Third Floor), 318 East Fourth Street. Part II,  Part III

Can a neighborhood economy comprised of locally based businesses serve as a healthy alternative to our global economy dominated by huge corporations? At the next Community Issues Forum, Kevin Jones, Co-Founder of Social Capital Markets, will make the case for investing in local enterprises concerned about building community as well as making a profit. (Jones will also be a speaker at the two day “Neighborhood Economics Conference” at Xavier University on November 17th and 18th. Go on-line to Neighborhood Economics Conference for more information.)  The Forum luncheon presentation takes place at 12:00 noon, Thursday November 19th, Christ Church Cathedral Forum Room (Third Floor), 318 East Fourth Street.

The number of people incarcerated in the U.S. grew from 623,388 in 1982 to 2.4-million today, while Ohio’s number rose from 13,256 to 50,600 during the same time period. This mass incarceration has resulted in harmful consequences for communities, neighborhoods, and family life. At the next Community Issues Forum, David Singleton, Executive Director of the Ohio Justice and Policy Center, will focus on how and why mass incarceration came about in this country and state, and he will discuss the current efforts to reform our criminal justice system   The Forum luncheon presentation takes place at 12:00 noon, Thursday December 10th, Christ Church Cathedral Forum Room (Third Floor), 318 East Fourth Street.MAP